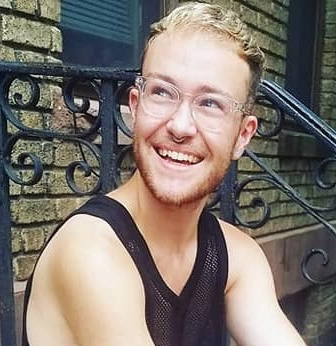 This June marks 7 years since I went to detox and began the treatment process to address my physiological dependency on intravenous heroin use and the chaotic relationship I held with opioids. Looking back, not using heroin anymore and attending a program that only saw absolute abstinence from all drugs as a form of success should have been the most challenging parts about my time in treatment, yet the most challenging factor to navigate was being trans.

When I first came out as transgender over 8 years ago, I identified as male and used he/him/his pronouns. When I called the treatment facility about getting a bed for detox, I knew I would have to figure out how being trans was going to work in a facility that divides people’s housing and their care into units based on gender. I explained to the woman working for the drug treatment facility that I was trans. After an already awkward silence continued, I interjected and explained how that meant that despite being assigned female at birth, I live as a man and use a name other than what’s on my license and insurance card.

“Well you’re going to have to forget about all that when you come here if you want to get a bed,” she said.
“Staying in a women’s unit may be weird for the women there, considering I have a beard and am usually perceived as a man,” I replied.

She explained I would need to shave my beard, asked me to “not deepen my voice” and do what I could to soften it, and told me I would not be allowed to wear my chest binder when I came there if I wanted to be able to qualify for a bed. This was the only detox facility I could access that was covered by insurance. It wasn’t as though the other facilities I spoke to were any more accommodating, and none had openings for beds any time soon. It was either do the things the woman on the phone told me and go to detox there, or don’t get help. I wanted help so badly that I did everything asked of me.

I cried as I shaved the facial hair that took me so long to grow out. I packed as many sports bras as possible while leaving my binder at home, not wanting to release my hands’ grip on it when packing. For the next few days, I hunched my shoulders over, slouched to hide the visibility of my chest when walking around, clung to my bed in the dark as many hours a day as possible—which I would continuously get yelled at for by staff—and tried praying that the time would pass more quickly. My mom was sweet enough to drop off my binder and a few pictures of my family and dogs for me while I was there. The staff gave me everything except my binder. I spent my last day in detox begging the nurse for over 10 hours not to release me without a bridge script for buprenorphine (the Suboxone I was taking while there). When she finally set me up to pick up the bridge script, she referred to it as a “special favor.” Once I finally got the script, my mother picked me up and I never felt so relieved to go home.

A week later, I began attending outpatient treatment. On the first day, I met with the Director of the outpatient program and immediately explained that I was trans, explained that I wanted my name and pronouns to be respected and accepted despite what was listed on my identification, and told him about the way I was treated by staff in detox. He reassured me that outpatient care would be much different than my time in inpatient. He made sure that the name on the group roster would be changed to match up with the name I went by (Luke) and said that he would not make me attend the gender-based group that others were required to attend. It wasn’t perfect, but it was better.

My first counselor; however, would spend an average of 40 minutes per 60-minute session asking me about the nuances of my sexual orientation and about being trans. He would ask me things like “So if you date another guy, does that make you gay or straight?” I always wondered what his case notes said. After he threatened to end my outpatient treatment (which would mean being kicked off Suboxone as well) for not attending individual sessions with him out of discomfort, I went to the Director and insisted that I be switched to a different counselor. The next counselor I was assigned was incredible. I went to outpatient for group classes and counseling for a total of five days a week. Later on, I went in for one or two groups a week, saw the Suboxone doctor biweekly, and saw my new counselor as often as I could as I had a great relationship with her.

Fast forward about 10 months from when I started outpatient: I was doing really well. I had been on Suboxone for a while, I had secured a full-time job and was doing well, and while I kept having recurrences of use with cannabis that would require me to need to go to group more often or require an increase in how often my drug screens were, I was doing better than I had in a long time. 10 months or so into my time in outpatient, though, one of the older counselors was in the men’s bathroom the same time I was. He shouted through the stall, “Why is no one supervising your drug screen!?” Anyone who is trans knows how horrifying it is to have anyone speak to you through a bathroom stall, let alone shout at you. He must have later gone to the director complaining that my drug screens were not supervised, because my counselor then went to bat for me about that. She defended the fact that I never tampered with a drug screen before and that there was no need for me to have supervised drug screens, insisting that the other counselor not get involved with a client that wasn’t on his caseload... but at this point it raised a lot of attention to my case.

Looking back, I think they were honestly annoyed that I was still attending outpatient at all given that I was mostly there for the individual counseling sessions and access to their Suboxone doctor. (Imagine that—I was there for treatment!) Either way, the director told my counselor that I would need to start using the women’s bathroom and have supervised drug screens if I was going to remain in treatment there. As a trans man, I was outraged at the idea of needing to use the women’s bathroom. When I shared about this issue in group, the other men offered to sign a petition for me saying that none of them minded me using the same restroom as them.

The director claimed his hands were tied and that his supervisor was the one to make the decision, not him. My treatment was brought to a screeching halt as I refused to continue going there if they were going to force me to use the women's facilities. I told the director that I had put up with a lot since I started coming here, and that I would figure out a way to make my recovery work, but that I demand he think about the people who come there expecting a loving, embracing hand who would instead be shown rejection and therefore be put at heightened risk for an overdose upon their rejection, all because they don’t provide equitable services for trans people. When I left, a combination of “counseling, yoga, and MAT” was recommended to me, as I was told I would likely need a “unique” form of treatment to succeed.

What I really needed was harm reduction, resources, and options—and that should not be unique. I share this story not to deter any of my trans and/or gender nonconforming sibs from seeking treatment, but as a call upon all those working in the treatment world to demand you do more to provide equitable, accessible care to trans and gender nonconforming people. Love, compassion, and non-judgmental care are necessary at every turn in one’s recovery. The one thing this facility can take credit for is growing the activist and advocate inside of me. I refuse to have my autonomy stripped away, and will not stop fighting for the autonomy of people who use drugs to be restored and respected, and I won’t stop demanding that those most vulnerable to structural violence are the ones leading the fight for justice when it comes to telling our own stories. Thank you for reading part of mine.

Voices of Community Activists and Leaders of NY (VOCAL-NY) Organizer & Harm Reductionist
Luke Grandis (they/them/theirs), 31, is a queer and nonbinary Organizer and Harm Reductionist based out of Albany, New York. Luke is the Upstate Lead Organizer for VOCAL-NY (Voices of Community Activists and Leaders of NY), a statewide, grassroots organization fighting to end the drug war, homelessness, mass incarceration, and HIV/AIDS. Luke is a member of the End Overdose NY coalition and helps coordinate the Capital Region Harm Reduction Roundtable. In addition to their current work Organizing at VOCAL-NY, Luke’s work experience in the realm of harm reduction includes syringe exchange, safer injection and safer drug use education, Hepatitis-C & HIV education, testing, and linkage to care, overdose prevention and naloxone training, as well as case management for people seeking access to Buprenorphine and Methadone, Medical Marijuana, and in housing retention for PLWHA. Luke seeks to combine their work experience with their experiential authority as a person in remission from intravenous drug use to continue educating others about harm reduction, overdose prevention, and drug use, and organizing directly-impacted individuals to build their own political power to pass life-changing policies relating to substance use, mass incarceration, housing insecurity, and AIDS.